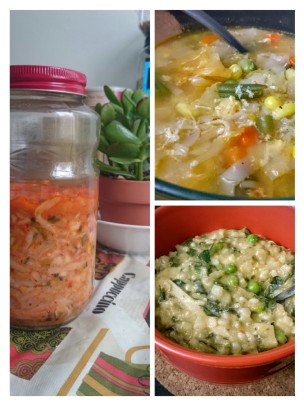 I have always been rather fond of Korean food. My first brush with it was at the Korean restaurant in Delhi and I was absolutely exhilarated. Interestingly, its appeal to me came not from its exoticism, but by its familiarity. Each morsel invoked memories of a particular delicacy from home. Strange, isn’t it? How can a Korean meal make a girl from India homesick?

The answer lies in the umami flavor. Having grown up around coastal villages, I have always been rather partial towards seafood. Some Korean flavors made me reminiscent of a chutney that my mother used to make from the kolim” shrimp paste. Kolim or Mysopodosis orientalis is a shrimp variety that is found in the coastal waters around Vasai and Palghar, both of which are located on the north of Mumbai. Having immigrated to non-coastal cities in last ten years, relishing a kolim chutney may have become a rarity for me. Yet, I keep finding ways to relive its memories and have learned to find it in the umami flavors. Naturally, I took ready liking to Korean cuisine. Not to mention, its emphasis on fresh green vegetables made it rather wholesome experience in our quest of healthy eating.

After coming to Michigan, it took me only few more days to once again enjoy a hot pot of Korean bibimbap at the local restaurant and my resolve to venture into the Korean cooking was refueled. My first experiment was of Kimchi, as you can see in the title and the accompanying photo of this post. I largely followed the recipe given by the Kitchn here. There were only some tweaks though.

It took about four days for the kimchi to ferment to the sourness that I liked. It was a great fun to check it on everyday, push the vegetables in its briny-spicy soup, and yeah of course… then smacking those fingers clean 🙂

Now that we have our kimchi ready in the fridge, we have used it in number of ways. Not only it can be enjoyed as a spicy pickle on the side, it serves as a great addition to perk up a bowl of soup or noodles or rice congee. In the collage above, you can see the  snaps of the soups and congee I made using kimchi and its brine. It adds range of flavors from umami to spicy and salty to sour. With kimchi, you can even altogether skip salt and not notice it. While making noodles and vegetable soup, I stir fried kimchi along with other cut vegetables. Whereas, in case of congee, I just mixed its dollop or two over already cooked rice congee along with some steamed vegetables. Since it is already a finished product due to fermentation process, it works both ways. I think, now homemade kimchi is going to be a regular feature on my pantry shelf.

A fervent home cook and food blogger, based in Michigan, USA.
Food blog was an obvious choice, once I realized my love for both, cooking and writing. I like to experiment with different cuisines and food cultures, with a focus on healthy eating.

Write to me at: foodncheer@gmail.com